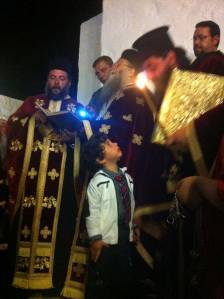 I’m a Greek. But don‘t ask me why our Easter sometimes coincides with everyone else’s and why sometimes it doesn’t. Maybe the Church gets it but I don’t.

Despite my theological ignorance, I am touched by the beauty of Easter in Greece. And this year’s was more beautiful than ever.

On Good Friday this year (the day the Greeks refer to as “Big Friday”) I set sail from Bodrum on White Wings, a thoroughly modern and luxurious 140 ft take on a traditional Turkish gulet. An incredibly seaworthy wooden beauty designed to cope superbly well with the Aegean. On board were Çem, Ali, Peter and crew. Friends. Kindred spirits.

We headed to Patmos. If you’ve been there then you’ll understand its spiritual magnetism. It’s the place where St John is believed to have received the visions which he recorded in the Book of Revelations. Many islands have their Chora. But the Chora of Patmos is something breathtaking to the spirit.

We docked early and headed up the hill to Chora. A couple of Turks and a Greek. Good Friday in Patmos was a revelation. To this Greek. And to his Turkish friends. Greek or Turkish, Christian or Muslim … anyone would be touched by the simple beauty and spiritual complexity of what we witnessed in the little square in the shadow of the monastery. And the image of the little boy tugging at the gilded sleeve of his bearded, singing priest father resplendent in the trappings of the Greek Orthodox Church will remain etched in my mind forever.

We celebrated the Resurrection in Amorgos the next night. With fireworks, gunfire and, I swear, a few sticks of dynamite, followed by a traditional meal of stuffed goat and a traditional soup which I have considered inedible since my childhood. From Amorgos we went on to Koufounisia (what beaches!), Schinousa, Ios, Santorini, Folegandros, Milos, Sifnos, Serifos, Kithnos and Tzia, docking in Athens where I am now writing this piece.

Sailing is a joy. But sailing in the Greek islands is a revelation. And I think of this introduction I recently wrote for a recipe book called “Cooking on the Boat” written by Lale and Çem Ape:

At anchor off a Greek island. Or somewhere off the Turkish coast.
A warm late afternoon. The sea gently lapping against the sides of the boat.
The outline of an ancient temple on the hillside. A fisherman’s caique cutting across the horizon. Great friends. Lively conversation. A glass of ouzo. Or raki.

This planet is full of magic, but much as I have travelled I have not found any like the Aegean. It’s a gentle place, an embracing place. A place of warmth. A place where life is lived with love. And where it is lived to the full. Not necessarily with opulence, but with a richness you will not find elsewhere.

I am Greek, but my ancestral home is Turkey – it’s where my grandparents grew up. Maybe that’s why I love both sides of this ancient sea as much as I do.
Or maybe it’s just because of the magic.